Since its inception in 2013, Project Leadership has graduated more than 350 diverse individuals from throughout California, with additional locations implementing this year. The program is funded through a grant from the Lucile Packard Foundation for Children’s Health.

Read about program outcomes and see below for highlights some of the outstanding and ongoing work of our alumni.

d from Family Voices of California’s Project Leadership family advocacy training program in 2016, and in early December he graduated from Thomas Jefferson School of Law.  When he officially becomes a licensed attorney, he looks forward to assisting families like his who are struggling with access to disability resources.

“I paid a high price in time, health, and money to learn how to advocate for my children, and the price was too high to not share [what I learned].”

Mark’s journey to law school began with a fight for access to services for his two children, Rohan and Violet. Rohan was diagnosed with Autism shortly before Senate Bill 946 was signed into law, requiring health plans to cover Autism services as a medical benefit. To cover Autism services for Rohan, their health plan conducted their own evaluation. They concluded that Rohan was typically developing, contradicting the conclusions from 5 previous evaluations.

When Violet began showing signs of Autism and received a similar inaccurate evaluation, Mark sought the help of state disability advocates who helped him file independent medical reviews of both children’s evaluations. Both reviews confirmed what Mark and his wife already knew: Rohan and Violet had Autism Spectrum Disorder.

Until the family reached out to local disability advocates, Mark and Emily felt like they were in the fight alone.  He was resistant to the idea of community support at first, but eventually came around.

“I joined a local support group and it just started to heal me.”

Sharing his experiences with others, especially parents who were just starting their special needs journey, was especially rewarding for him.  It was in that support group that Mark heard about Project Leadership.

Project Leadership is a comprehensive advocacy and leadership training program designed to increase the number of family members of children with special health care needs prepared and supported to become advocates for health care policy and service improvements. FVCA has trained 130 facilitators from 70 local organizations serving families of children with special needs in nearly 45 California counties and 3 additional states. Local organizations have graduated more than 500 family members from the 7-session training program, which provides information, skills, and tools to help families move from individual to systems level advocacy.

If you are a Project Leadership graduate or trainer and would like to be featured in an upcoming FVCA newsletter, contact abarclay@familyvoicesofca.org

April 2-3, 2019 (Santa Ana): Twenty representatives of organizations from 5 California counties completed a Training of Trainers workshop hosted by the Regional Center of Orange County (RCOC) and Comfort Connection Family Resource Center, expanding the Project Leadership network to nearly 90 facilitators. This diverse group of trainers plans to conduct trainings in at least 5 languages in 7+ counties. Thanks to the RCOC, State Council on Developmental Disabilities Orange County office, and Eli Lilly and Company for sponsoring this training.

Building Relationships for Our Kids

February 6, 2019 (Alhambra): Project Leadership graduate Gloria Ruiz is a powerhouse mom who advocates for her own children, and through her role at Eastern Los Angeles Family Resource Center (ELARC), uses her knowledge and passion to mentors and empower others so that they can do the same. Gloria recently coordinated newly elected State Senator Bob Archuleta to ELARC’s annual Partnership Breakfast, and said, “It was a true celebration of family strengthening. He’s certainly enthusiastic and charismatic, and with a little more time spent listening to the needs of our families, he could be a champion for US!”

Kudos to Gloria and her colleagues at ELARC for creating a connection with their new senator, and informing him of issues facing families of Children with Special Health Care Needs.

January 14-15, 2019 (Stockton): Family Resource Network welcomed representatives of organizations throughout San Joaquin County, as well as Sacramento, Placer, Tuolumne, Alameda, and Contra Costa Counties for a Project Leadership Training of Trainers workshop, expanding the program’s reach into the Central Valley. The groups plan to partner to conduct trainings for families in 10+ counties. Thanks to Family Resource Network and Eli Lilly and Company for sponsoring this training, and to Valley Mountain Regional Center for hosting the group.

NOVEMBER 30, 2018 (Monterey): When the Monterey City Council debated a proposed ordinance restricting the use of plastic straws Project Leadership graduates from the Central California Center for Independent Living (CCCIL) got involved. Graduates Teresa Zamudio and Melissa Salazar joined CCCIL board member Johnny Morales and consumer and parent Sandy Nyles at the 11/20/18 City Council meeting where they shared their personal stories, underscoring the need for an exemption for people with disabilities. Their comments helped Councilmembers understand the importance of ready access to plastic straws for their family members; and the Council approved the ordinance with an exemption for people with disabilities.

OCTOBER 30, 2018 (Hawyard): UPDATE — Project Leadership graduates Emelyn Lacayo and Daniel Vasquez attended countless meetings, raised funds, and advocated for an accessible playground for daughter Mia, who has special health care needs and disabilities. This fall their dream was realized with the groundbreaking of “Mia’s Dream Come True,” playground in Hayward.

The Mental Health Journey of a Mother and Daughter 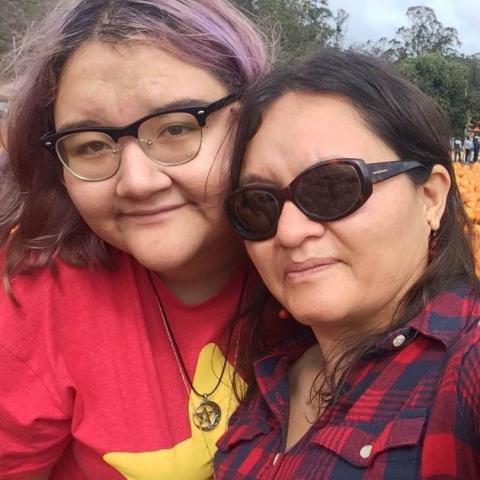 JUNE 20, 2018: “When Magaly was 11, her mother, Olga, found suicide plans on her phone. Six years later, they continue to navigate the challenges of Magaly’s diagnosis of depression and psychosis. Their journey touches upon the importance of early identification of mental health issues, access to care, and the struggles for support. Children with chronic and complex physical conditions often have mental and emotional issues that go unrecognized and untreated.” This article was co-authored by Olga Maldonado, a Project Leadership Graduate, and her daughter, Magaly Carranco.

JULY 19, 2018: “Many parents say they struggle to get equipment, in part, because they don’t understand the system. Yuki Baba, a 54-year-old translator who lives in Berkeley, Calif., waited a year to get a hospital bed for her son, Nate, who has cerebral palsy. At 5, Nate was still sleeping in a crib he’d outgrown. Nate is insured by both California Children’s Services and Medi-Cal, the state’s health insurance program for low-income people, and Baba kept calling the wrong program for help.” Read the full article

The article, written by Jocelyn Wiener, was first published by Kaiser Health News, which publishes California Healthline, a service of the California Health Care Foundation, and was also featured in the Washington Post.

Donnell and DJ Sink Their Teeth into Denti-Cal Funding

MAY 22, 2018 (Sacramento): California State Senator Scott Weiner (11-San Francisco) invited Project Leadership facilitator Donnell Kenworthy and her family to testified before the California Senate Appropriations Committee in support of his Senate Bill 1464, which would provide additional funding for dental care through Denti-Cal.

MARCH 15, 2018 (Sacramento): Family Voices of California Training Manager and Project Leadership facilitator Elaine Linn, her husband Mike, and her son Toby, joined representatives of the California Down Syndrome Advocacy Coalition on the Floor of the California State Assembly for presentation of a resolution (ACR 165) by Assemblyman Tim Grayson (14-Concord) designating March 14-28 as Down Syndrome Awareness Week, and March 21 as Down Syndrome Awareness Day. The Resolution passed unanimously, with many assemblymembers signing on as co-authors, and commenting about the importance of ensuring access to health care, education, supports, and employment for people with disabilities. Assemblyman Grayson’s sister Shari, who happens to have Down syndrome, was featured during the presentation. View the Resolution, and watch a video of the presentation.

Cindy Goes to the Capitol

WINTER 2018: “JoAnna VanBrusselen is busy these days encouraging parents of students with disabilities to ‘open their minds to general education classes.’” Click here to read the Winter 2018 edition of The EDge.  JoAnna’s story is featured on Page 9.

SEPTEMBER 26, 2017: Elana Ford collaborated with a local photographer to document her son, Gideon’s, fourth brain surgery. The complete photo essay tells the story of the days before, during and after the operation where a bio-plastic plate was inserted and meshed with Gideon’s skull to replace a section of bone that was lost to infection one-year prior. To view the photo essay, click here. In addition, Elana also serves on the Family Advisory Council at UCSF Benioff Children’s Hospital.

Alison and Family Head To D.C.

Yuki’s Op-Ed: Why I’m Fighting The State On Behalf Of My Son

JUNE 28, 2016 (Sacramento): Alisa Rosillo worked with her local Assemblymember to successfully pass AB 622 which requires that all “commercial places of public amusement” built after Jan. 1, 2020 include and maintain at least one adult changing station for people with disabilities. Additionally, Alisa also initiated AB 1531 back in 2007 which raised the fine for those abusing disabled parking spots and ensures the spaces are well-maintained. To read her story, click here.

JUNE 21, 2016 (Hayward): Daniel Vasquez and Emelyn Lacayo successfully spearheaded an accessible playground in their daughter, Mia’s, name. Born with a nervous system disorder, Mia uses a wheelchair and is usually unable to join her friends on typical play structures. Make-A-Wish Greater Bay Area granted Mia’s wish in 2016, and the Hayward Parks And Recreation District Foundation is currently waiting on a series of grants to come through before building can commence. To read the latest update, click here.

Pam’s Op-Ed: When Autism Ages Out Of The School System

DECEMBER 7, 2016: Shot by Pulitzer Prize-winning photographer Deanne Fitzmaurice, this documentary series from the Lucile Packard Foundation For Children’s Health was originally covered by CNN and features an intimate look at what it takes to raise a child with a disability or chronic illness. The series follows 10 families (including  Project Leadership graduates April Villafana, Pei Wang and Beverly Baker-Ajene) throughout day-to-day life. To view the photo series, click here, and to read individual stories click here.

2015: Anne Hall, Research Librarian at the Federal Reserve Bank of San Francisco, was profiled as part of the company’s #Unreserved blog series. The piece covers Anne’s professional background and also discusses how the organization worked to accommodated her out-of-office needs as she took her daughter, born with a congenital heart defect, to appointments. Anne was then inspired to join the Family Advisory Council at Oakland Children’s Hospital which helps staff understand the patient perspective and strives to improve family-centered care polices within the hospital. To read her story, click here.

MAY 5, 2014: Cherese LeBlanc and daughter, Kayla, were the subjects of a short feature produced by a University of California, Berkeley journalism graduate student. The video addresses Kayla’s disability, bilateral perisylvian syndrome, which causes her cerebral palsy  and epilepsy. In the short, Cherese explains how’s she’s decreased Kayla’s seizures from 60 to 30 a day with the use of THC tinctures. There’s also footage of the Project Leadership training Cherese attended in San Francisco where she discusses the powerful impact of meeting other parents like her. To watch the video, click here.

Lillian Fights Discontinuation of Program for Students With Disabilities

FEBRUARY 24, 2014: Parents of students with disabilities organized a petition to stop the proposed discontinuation of ITALC at Francis Scott Key Elementary School in San Francisco. The special day class helps non-verbal students strengthen their communication skills by using assistive technology. Lillian Moncada was interviewed as part of NBC Bay Area’s reporting on the topic. To read the article and watch the video, click here.

With Half of California’s Kids on Medicaid, Advocates Worry About Service (Diana Vega / January 29, 2015)